Need help with a Subordination Agreement?

What is a Subordination Agreement?

A subordination agreement is a legal document that establishes one debt or claim as ranking behind another in priority for repayment. The priority of debt repayment can become very important if a company or individual defaults on their debt repayment obligations and declares bankruptcy.

Generally, a subordination agreement is used to rank debt priority by lenders to ensure repayment priority from the borrower.

Purpose of a Subordination Agreement

A subordination agreement is generally used when there are two mortgages and the mortgagor needs to refinance the first mortgage. It acknowledges that one party’s interest or claim is superior to another in case the borrower’s assets need to be liquidated to repay debts.

When multiple liens against a property exist, a subordinate agreement will set lien priority. Often lien priority will be decided based on date of mortgage, the first mortgage receiving priority over others. Some other liens, such as property tax liens also receive automatic priority. Lien priority determines the order in which debt will be paid if that prosperity is sold in a foreclosure sale.

Lenders of superior debts will have the legal right to full repayment before lenders of subordinated debts receive their repayments. In a case where the debtor doesn’t have the funds to make all repayments, the subordinate lenders might receive less or no repayments at all . For instance, when limited or no funds are available after a foreclosure sale, liens with low priority may not receive all or any repayments.

Therefore, a subordination agreement will adjust new loans’ priority so that when there is a foreclosure, it gets paid off in order of priority.

There are two main types of subordination agreements:

Here is an article about the purpose of subordination agreements.

Who Benefits from a Subordination Agreement?

Individuals and businesses need to borrow funds. For this, they turn to lenders or lending institutions. The lenders earn interest on borrowed funds till all repayments have been made. In case the borrower places other liens against the asset, such as a second mortgage, the lender would require a subordination agreement to protect its interests.

One might think why would other lenders agree to subordinate? Since conventional first-mortgage lenders do not agree to refinance a loan unless they are ensured priority in case of repayment, the only way refinancing works is through a subordination agreement. It provides ensured priority repayment to the first lender.

Second or junior lienholders do not agree to subordinate automatically unless the home equity is sufficient to cover all loans. Given these complications of refinancing, subordination agreements are relatively common practice in the lending industry. It benefits the homeowner by providing a lower interest on their property and also provides assurance to the primary lender that all debts will be repaid. 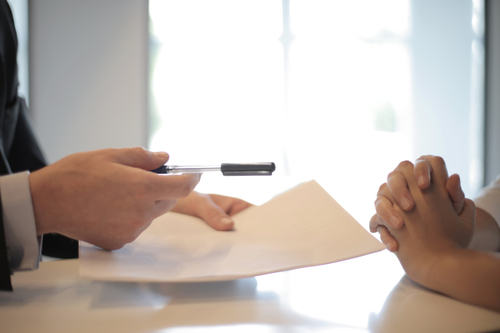 Image via Pexels by Andrea

When Subordination Agreements are Used

Subordination agreements are used when borrowers are trying to acquire additional funds while already having other loan agreements . It is generally used by property owners to take out a second or junior mortgage on their property to refinance their property.

Refinancing is the process of paying off an old mortgage and replacing it with a better one. Once the first loan is paid off, the second ranks up in priority automatically. Subordination agreements make this possible.

Here is an example of refinancing. For example, if you want to refinance a primary loan of $300,000 with 6.5% interest for a loan with lower interest rate. Let’s say you have a Home Equity Line of Credit (HELOC) on the property for $50,000. This would make the house worth $400,000. When refinancing, you would be paying off your first mortgage with a new loan. The HELOC would then technically move up in priority as it was made earlier. The second lender, which is helping you repay your first debt, would want to gain priority over HELOC so it would request HELOC to subordinate. Since the property has good equity to cover both loans, the HELOC lender would generally agree to give up its lien priority.

For example, a business has borrowed $400,000 from a primary lender and has $200,000 in subordinated debt. In case it declares bankruptcy, the company’s assets will be liquidated. If the company’s liquidated assets are worth $500,000, the primary debt of $400,00 will be paid first in full and the remaining $100,000 will be distributed among the subordinate lenders. Shareholders will receive nothing in this process.

Get Help with a Subordination Agreement

Meet some of our Subordination Agreement Lawyers

As a corporate lawyer, I have dealt with international transactions, complex litigation and arbitration, regulatory compliance, and multijurisdictional tax planning. In March 2021, I started my firm and shifted my professional focus to working with start-ups, small businesses, entrepreneurs, and families. I help my clients structure and run their businesses and take care of their assets, including intellectual property issues and estate planning for their families. I try to bring big law quality and small firm personal attention to every client.

I am a solo-practitioner with a practice mostly consisting of serving as a fractional general counsel to growth stage companies. With a practical business background, I aim to bring real-world, economically driven solutions to my client's legal problems and pride myself on efficient yet effective work.

NJ and NY corporate contract lawyer and founder of a firm specializing in helping entrepreneurs. With a background in law firms, technology, and world class corporate departments, I've handled contracts and negotiations for everything from commercial leases and one-off sales agreements, to multi-million dollar asset sales. I love taking a customer-focused and business-minded approach to helping my clients achieve their goals. Other information: learning to surf, lover of travel, and one-time marathoner (NYC 2018) yulawlegal.com

Attorney that has worked in both litigation and transactional fields. Motivated and personable professional. Speaks fluent Spanish and very basic Portuguese.

If you're looking for an attorney who can help your business succeed, look no further! With my experience in the legal field, I can provide you with the legal advice you need with entity formation, contract drafting, business operations, and more, And because I'm committed to providing high quality service, you can be sure that your needs will always be met. Contact me today to learn more about how I can help your business thrive!

Create a Novation/Reassignment agreement + include a monthly subscription clause