What Is a Breach of Contract?

A breach of contract occurs when one party does not adhere to their conditions listed in the agreement between two or more parties that outlines a specific exchange of goods or services. Parties can breach a contract either in whole or in part. Common examples of a breach of contract include:

Identifying a Breach of Contract

In order to prove there's been a breach of contract so that you can seek compensation, you must confirm the following:

Types of Breach of Contract

In an anticipatory breach of contract, one party notifies the other to let them know that they won't be able to fulfill some obligation in the contract. This often gives both parties an opportunity to work through challenges and either create a new contract or consider legal action.

An actual breach of contract happens when one party fails to perform an obligation as outlined in the contract. Minor and material breaches of contract are both subcategories of actual contract breaches.

Breach of Contract and Lawsuit

Usually, the first step after a breach of contract occurs is to try and remedy the situation through mediation of non-legal means. However, if this approach is unsuccessful, the wronged party might seek a legal remedy through a lawsuit. The amount of money in question will determine whether you can enforce the contract in small claims court or large claims court. 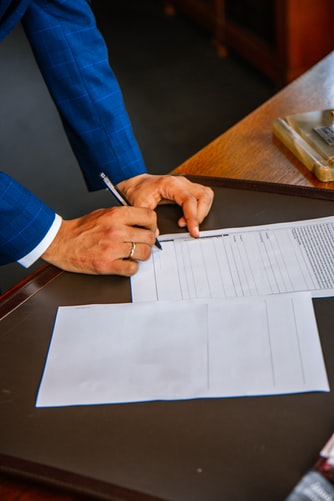 Image via Unsplash by @yapics

When a breach of contract occurs, there are usually three general remedy options for the wronged party — damages, specific performance, and cancelation and restitution.

Damages, or payment, are the most common type of remedy for a breach of contract. Damages come in many forms and can depend on the industry, terms of the contract, and desires of the parties involved in the lawsuit. A few common types of damages include:

The specific performance remedy involves the judge ordering the party at fault to complete a specific action, project, or obligation in place of damages. This is a rare remedy, and it is only used if monetary compensation could not replace or rectify the damage done through the breach of contract.

There are some defenses the breaching party can use if the breach of contract was out of their control. Common defenses include:

To avoid breaching a contract, it's vital you understand all the specifics and terms within the contract. During negotiations, ask any questions you have, double-check deadlines, and request any examples or clarity from the other party. Create a schedule for yourself to ensure you're meeting all deadlines and will have the final project delivered on time to avoid any contract breaches.

How to Handle a Breach of Contract

A clear, well-defined contract is the best way to avoid a breach of contract or to seek damages in the case of a breach. Connect with a contract attorney if you need assistance drafting a contract or seeking legal remedy for another party's wrongdoing.

Meet some of our Breach of Contract Lawyers

15 years for legal experience; expertise in contracts, healthcare, ERISA, physicians, financial services, commercial contracts, employment agreements, etc. I am adept at all contracts and can provide you with efficient and quality services. I have worked at a law firm, financial services company, consulting ,and non-profit.

Craig E. Yaris is a partner at Parlatore Law Group, with the experience and drive to handle all your Franchise, General Business Practice, and Mediation needs. As a former small business owner and Chief Operating Officer of a franchisor himself, Mr. Yaris is passionate about promoting business growth. He has experience handling daily operations, employee disputes, and negotiations of pertinent contracts for a franchise company with 100 locations in five states, where he organized and conducted semi- annual meetings to educate and inform franchisees of best practices for improved growth. In addition, Mr. Yaris was responsible for the preparation and filing of the UFOC (Uniform Franchise Offering Circular) in several states and is well-versed in business formation. Between his time as Franchisor and Conflict Resolution Specialist, Mr. Yaris was the Co-Founder and Chief Operating Officer of an online company whose goal was to help inform marketers and business owners of the fast-paced and ongoing changes within their specific verticals. This experience helped him hone his research and writing skills and prepared him for the cloud-based aspects of Parlatore Law Group. Mr. Yaris also has extensive experience in public speaking, as he has planned and delivered several keynote addresses and educational seminars for many New York-based organizations, and as a Continuing Education Instructor for Hofstra University. Prior to joining Parlatore Law Group, Mr. Yaris worked as a Patient Advocate, and more recently, a Conflict Resolution Specialist, where he mediated and resolved disputes on behalf of patients with insurance companies. In this role, he negotiated for coverage of previously denied medications and medical procedures as well as successfully mediated disputes between individuals and business partners which would have otherwise resulted in protracted litigation. In addition, he has experience mediating employer and employee disputes as well as helping resolve family conflict. He has also studied and attended many Non-Violent Communication (NVC) workshops and strives to bring these tools and methods to all of his mediations. His variety of experiences speak to his ability to handle small business needs at all stages of business growth and development. Mr. Yaris also has experience with business growth and development, as he has worked with several small business on creating and implementing strategies for steady growth. In addition, to spending time with family, Mr. Yaris volunteers his time helping spread the message of the ACLU and he supports many local charities focused on families and children. He is admitted to practice in New York.

I am a solo practitioner with offices in Denver, Colorado and Austin, Texas with a focus on general business and real estate contracts.

Meghan Thomas is an accomplished transactional attorney. She specializes in real estate transactional matters, property disputes, IP, tech and business contracts. Meghan's innovative leadership style has attributed to the firm's rapid development and presence in the metro-Atlanta market. She obtained her Doctor of Law from Emory University where she worked with the State Attorney General and litigated property disputes for disadvantaged clients. ​ Prior to practicing, Meghan negotiated complex transactions for Fortune 500 tech and healthcare companies. She lives with her family in Southwest Atlanta, enjoys cooking, travel, dance and continues to develop her research in the areas of transactional law and legal sustainability.

With 15 years of extensive transactional/contracts experience reviewing and negotiating commercial contracts including a wide variety of purchase orders and contracts and non-disclosure agreements (NDA), I believe I can immediately contribute to the continued success of your team. I have been commended for a range of valuable skills—excellent contract management and contract administration, legal research, risk analysis, drafting and negotiations, and strategic thinking. I have worked as a legal consultant for 10+ years and I have reviewed over 7,500 contracts through this position. Contracts I have reviewed include but not limited to purchase orders, commercial and construction contracts, equipment rental agreements, non-disclosure, confidentiality, vendor agreements, service agreements, site access agreements, international agreements, request for proposals (RFP), bids and government contracts. These experiences have enabled me to master the ability to work independently and expeditiously to identify and assess issues and provide legally sound recommendations, consistent with good business practices. I have led teams (sales, insurance and management) to successfully negotiate contract terms with customers. Effective Communicator and Negotiator. I am a people person, and for the past 13 years, I have acquired excellent oral and written communication skills that enable me to interact and negotiate effectively with stakeholders at all levels. I am a self-starter with a strong work ethic. I have a high degree of resourcefulness, diligence, and dependability. Most important, I adapt to changing priorities quickly, thriving in an environment with high volume and short turnaround deadlines. My experience over the years allows me to transfer my skills to all types of contracts to meet the client’s needs. I am hopeful to provide similar legal expertise, effective contract administration and leadership to your organization. It would be a pleasure to meet within the next few weeks and discuss how my qualifications, experience, and capabilities will best fit the needs of your outfit.

In his firm, Talented Tenth Law, Antoine focuses on helping people maximize their protection and prosperity in the courtroom and the boardroom. His firm’s services include representing people in lawsuits involving breach of contract, many types of civil lawsuits and helping business owners win government contracts among other things.

Tom is a former chief legal officer of public and private companies. He has extensive experience in mergers & acquisitions, commercial transactions, joint ventures, finance, securities laws and general corporate law across a broad range of industries, including construction, consumer products, e-commerce, energy and healthcare. As an attorney who practiced at two different Top 50 international law firms, he can deliver "Big Law" service at a competitive price. Prior to becoming a lawyer, Tom served as an officer in the U.S. Army and attained the rank of Captain. He served a tour in Iraq where he led a reconnaissance platoon and was awarded the Bronze Star Medal.

Amy has served as outside general counsel and litigator to established businesses throughout western Washington since 2010. Her passion and focus is providing the best possible representation for clients in the construction, transportation and hospitality industries.

I am bar certified in the lovely state of Missouri. I received my J.D. from The University of Iowa College of Law (2019) and my B.A. in Political Science from BYU-Idaho (2015).

We are here to help. Get started. No upfront payment.

Breach of Contract lawyers by city