What is a Contract Dispute?

A contract dispute happens when one or more parties disagree on the terms, definitions, and conditions contained within it. In such a case, the contract may be contested in court.

A contract dispute arises between parties in a confidentiality agreement or nondisclosure agreement when information or intellectual property has been shared against the contract’s obligations.

Although contracts are often negotiated, people do not always see eye-to-eye. When there is a breach of contract, or one or both parties disagree on the terms or definitions contained in the contract, a contract dispute can arise.

Here is an article about the legal definition of a contract dispute.

Who Can Dispute a Contract?

Any involved party can dispute a contract, but it generally occurs when one party accuses another of a breach of contract.

Under this breach, one party asserts that one or more parties have not fulfilled their agreement's conditions or have violated previously agreed-upon terms.

All parties can sue one another for damages as the result of a contract breach. In case of a confidentiality and non-compete agreement breach, a party may sue another for using intellectual property or stealing ideas for personal gain.

It is not uncommon for one party to dispute a contract and be countered by the accused party. For example, they may claim that there were limitations to the terms not covered under the initial contract, which renders their actions legal and just.

Ultimately, if mediation cannot occur amicably through an attorney, the contract dispute may go to court.

Here is an article about what constitutes a legal contract.

How Do You Dispute a Contract?

If you want to dispute a signed contract, you can send a letter of termination to the contract issuer.

In most business contracts, a contract termination agreement outlines the requirements for cancellation. This may include a monetary fee or other requirements, such as removing all references to a business to avoid any future affiliation.

Working with an attorney who knows contract law well can prevent you from making any big mistakes that result in major financial losses or even legal penalties.

If you are disputing a non-competition agreement, you will need to demonstrate there is no need to enforce such agreement or prove there has been a breach of contract. You may also argue that the terms of a contract were not set for a fair amount of time.

Remember that every contract lays out limitations for its parties to adhere to; if you feel that these terms somehow negatively affect your business’s performance, you may use that defense to justify disputing the contract.

Here is an article that can help you find loopholes in a non-compete agreement. 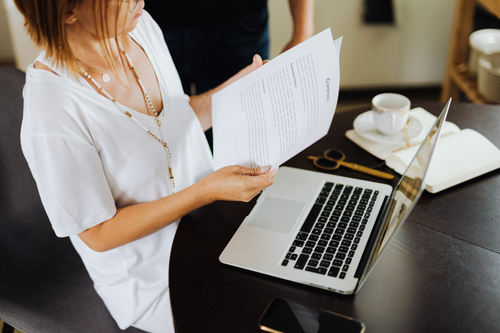 Image via Pexels by Karolina Grabowska

The most common contract disputes arise from a breach of contract. There are two types of contract breaches to know.

It is easy to differentiate between material and minor breach by considering the goals and consequences of the actions. For example, suppose a person or company’s actions alter the goals of an agreement entirely. Then, a material breach is likely to blame.

If a goal is achieved, but it is not done so in an agreed-upon fashion or under false pretenses, then a minor breach has occurred.

There are several other types of common contract disputes you may encounter.

For example, a company partnering with a consultant may have them sign a CDA or NDA to prevent sharing their patented technology or methodologies with others.

A contract dispute can then arise if the contract issuer accuses the signee of sharing, leaking, or stealing information.

When consumers purchase a product with a warranty, they expect to be sold an item free of any hazards or defects.

Suppose a company sells a product with a warranty that violates the said warranty. The consumer may sue the company for a breach of contract.

Although it requires no signature, a product warranty is a contract between the seller/manufacturer and the consumer. If a product harms a consumer or does not work according to its promised and advertised standards, consumers may sue for damages.

Modern companies rely heavily on partnerships with other businesses. When a company feels its partner has not fulfilled its requirements or otherwise breached a partnership agreement, it may sue for damages.

However, a partnership must have clear objectives, expectations, and requirements in its terms and conditions. Otherwise, it can be difficult for a company to prove that a legal breach has occurred.

This is why measurable objectives are always beneficial in company agreements. It is another reason monetary compensation or data-driven transactions are so common; it is easier for all parties to be held accountable when quantitative figures are used as part of their agreement.

Sales of goods contracts between suppliers and merchants are prone to disputes due to their open-ended nature and often vague terms.

In a sales of goods contract, the merchant trusts that the supplier will provide goods to their customers. As a result, disputes over failure to deliver products as advertised or even ship them are highly common between wholesale merchants and their suppliers.

If a product does not arrive in a timely manner, is never shipped, or is significantly not as described (SNAD). A merchant may sue the supplier for a breach of contract.

Here is an article to learn more about civil wrongs and what might qualify as a breach of your contract.

What Causes a Contract Dispute?

Any suspected or potential breach of contract can lead to a dispute. All it takes is one party to believe another has broken the agreement to cause a dispute.

No legal guidelines determine what someone can or cannot take a dispute over. However, to prove their case, the accusing party will need to bring forth a sound argument and any evidence that the accused has violated their agreement.

3 Ways to Resolve a Contract Dispute

There are three ways that parties may go about resolving a dispute. These are:

Suppose parties are willing to negotiate, even through their own attorneys. In that case, you may be able to resolve contract disputes without needing to go to court.

How Do You Avoid a Contract Dispute?

The easiest way to avoid a contract dispute is to use a contract lawyer to draw up all agreements before signing.

Negotiating contracts before signing is also a good way to prevent disputes. If all parties feel that they are receiving a fair and equitable deal, they are less likely to breach the contract later.

Unfortunately, disputes are not always preventable. However, open communication, willingness to negotiate and compromise, and clear termination clauses in all agreements can prevent lengthy disputes.

Post a project in ContractsCounsel’s marketplace to receive flat fee bids from lawyers for your project. All lawyers have been vetted by our team and peer-reviewed by our customers for you to explore before hiring.

Meet some of our Contract Dispute Lawyers

I am a startup veteran with a demonstrated history of execution with companies from formation through growth stage and acquisition. A collaborative and data-driven manager, I love to build and lead successful teams, and enjoy working full-stack across all aspects of the business.

The University of Iowa

We are here to help. Get started. No upfront payment.