Need help with a General Partnership?

General partnerships are a great way to pool your resources with someone who shares similar professional competencies. In the article below, we’ve outlined everything you need to know about general partnerships:

What is a General Partnership?

General partnerships, also known as GPs, are a type of legal entity that two or more owners create on a jointly-owned business. They establish the terms and conditions through a legal agreement. This business partnership agreement addresses ownership issues, such as profits, losses, and liabilities.

Pros and Cons of General Partnerships

It is critical to select the right partner to assist you in your business. Before making a final decision, understand the benefits and drawbacks of general partnerships.

Here are the five pros of general partnerships:

A general partnership is as simple to establish as a sole proprietorship . The formation of a partnership business requires only a few filings, such as a detailed partnership agreement that outlines the responsibilities of each partner in the business.

There is no need to draft a detailed legal document before starting operations. This assertion is true as long as each partner agrees on the guidelines for their business among themselves.

Partner report profits and losses incurred by the business on individual tax returns. This pass through entity gives them the benefit of the pass-through taxation structure.

Each partner is responsible for half of the company’s liabilities. If five partners are involved, the liability percentage drops to twenty percent for each, but this does not guarantee risk-free business because personal assets are at risk.

Here are the five cons of general partnerships:

Because a general partnership does not function as an independent entity, it lacks the financial protection of personal assets that a corporation or other types of business structures provide. If there is a problem with liabilities or losses, each partner may be personally liable depending on the cost, putting their assets at risk.

A partner cannot transfer or divest their interest in their own business unless stated explicitly in the general partnership business agreement. Some states use the unanimous voting method because there are no strict regulations for a transfer of interest.

Many states allow partnerships to run without a license. However, a general partnership must have a business license when necessary. Examples of businesses that require licenses are restaurants and bars. 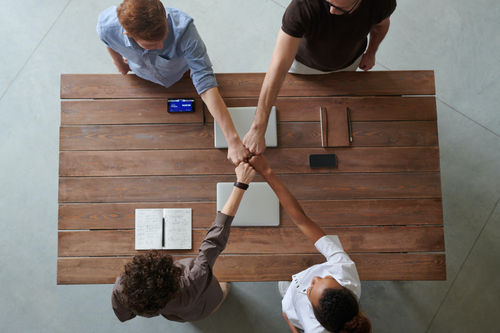 Who Owns a General Partnership?

Here are a few other issues to consider when looking at general partnerships vs. limited partnerships:

In the event of insolvency, general partners face unlimited liability. In other words, if the company goes bankrupt, bankruptcy courts can use the general partners’ assets to pay off debts. There’s virtually no asset protection on a general partnership.

Here are a few other essential considerations to make as well:

A limited liability company (LLC) is formed by filing “ Articles of Organization ” with the secretary of state’s office. The LLC specifies its name, whether the owners will run the company, the location of its principal office, and who will receive notices, lawsuits, and other official documents on behalf of the LLC.

General partnerships are formed by at least two people agreeing to be partners or conducting business and sharing profits even if there is no formal agreement. The partners do not file agreements and organizational documents. Unless it does business under the partners’ real names, the partnership must register a trade name.

General partners are personally liable for the debts of the company. These obligations include money owed for loans and agreements, as well as injuries caused by a partner’s or its employees’ wrongful acts. Creditors can seize the partners’ homes, bank accounts, and other assets to pay their debts.

A member’s liability in an LLC is limited to his investment in the company; they do not risk losing personal assets to pay company debts.

A single partner can act on behalf of the general partnership, putting the other partners at risk for unpaid debts, negligence, and intentional wrongdoing. A member-managed LLC, like a partnership, is run by its members.

There is no such thing as a general partnership that exists independently of its owners. The partnership ends when one of the partners dies, withdraws, or is unable to conduct business. An LLC survives the death or removal of a member because it is a separate legal entity and has operated indefinitely.

If you need a business formation or help with joint ventures, corporate lawyers and LLC lawyers can help you navigate the issues. They’ll ensure that you create the perfect structure that’s legally sound and healthy. Post a project in ContractsCounsel’s marketplace to find a legal professional in your state today.

Meet some of our General Partnership Lawyers

Alen is an attorney and licensed real estate broker with over 15 years of experience representing clients in real estate and business matters. Alen has extensive experience in business and real estate matters. The work includes lease/contract drafting & negotiations, real estate transactions, advising the purchase/sale of businesses, and other matters commonly confronting small businesses and individuals.

I'm a business law generalist with over 24 years of experience, including as in-house General Counsel, as outside counsel through my own firm and as an attorney in an Am Law 100 law firm. My employers and clients uniformly appreciate my ability to (i) negotiate and close transactions quickly and effectively, and (ii) to make the complex simple. Among other things, I can efficiently assist you on entity formation, governance, and structure; HR issues; mergers and acquisitions; and the negotiation and drafting of all types of commercial contracts. I'm the proud recipient of multiple Martindale-Hubbell Client Distinction Awards given only to the top 5% of attorneys for quality of service.

Strategic thinking business minded Outside General Counsel here to help you with your company. I have been able to help guide business owners from startup through series A, B, & C funding and ultimately IPO's. Regardless of your plans I am here to help you succeed as you grow your business.

Daliah Saper operates a cutting-edge internet and social media law practice that regularly leads local and national media outlets to solicit her commentary on emerging internet law issues involving cyberbullying, sexting, catfishing, revenge porn, anonymous online defamation, domain name and user-name squatting, privacy, and the latest business decisions made by social media platforms such as Facebook, Twitter and YouTube. As a litigator Daliah represents companies bringing or defending business and intellectual property disputes. (She has argued cases in a number of jurisdictions including taking a case all the way to the Illinois Supreme Court.) As a transactional lawyer she helps clients choose the right business entity, drafts contracts and licensing agreements, advises on sweepstakes and contest rules, and ensures website terms of use and privacy policies are compliant, and provides comprehensive trademark and copyright counseling. Since founding Saper Law Offices in 2005, Daliah has been named a 40 Under 40 by Law Bulletin Publishing Co., a top Media & Advertising attorney by Super Lawyers Magazine 14 years in a row, and has been repeatedly recognized as a leading media and entertainment lawyer by Chambers and Partners. For the past eleven years, she also has taught entertainment and social media law at Loyola University Chicago School of Law.

I help small business owners build and protect their dreams. I always thought that I would just be a litigator. Then I joined an intellectual property clinic in law school. We were helping nonprofits and small businesses reach their goals. I fell in love with the work and decided to open my own firm so I could keep helping them. When I decided to start Victrix Legal, I decided that it would be a modern law firm designed to serve professionals. It would be different from every other law firm. In my experience, my law firms are designed to promote inefficiency and reactionary lawyering. Because in most firms, you make more money when you spend more time on a project. And you lose money if your client doesn't get sued. In my opinion, that's a built-in conflict of interest. My firm is different. I use flat fees for most basic projects to keep costs predictable for you and incentivize efficiency. I offer long-term advisory plans and legal audits to prevent issues from happening. I want my clients to see me as their business partner, not just the guy they call when they are in trouble. If any of that interests you, please reach out to me. I offer free consultations. Let's set aside some time and talk about what your legal needs are.