Need help with a Contract Addendum?

What is a Contract Addendum?

It means that adding something new to a preexisting contract is possible. Within a legal context, contract addendums should have signatures from all the parties in the initial contract.

Example of When to Use a Contract Addendum

There're different instances where an addendum can be helpful. One such example is when appending changes to a lease agreement for a car. For instance, if the initial contract stated that the vehicle is a Honda, but in reality, it's a Hyundai. The addendum should help solve this matter.

The addendum ensures that the mistake is recognized and amended. Once every party in the initial vehicle lease agreement signs the addendum, the changes become legally binding as per the initial contract.

Another example of a contract addendum is when drafting an employment contract. Clauses that may be contentious in such agreements may be amended to reflect the changes. For example, the termination of employment clause is among the common adjustments that may require an addendum.

For instance, if the initial employment contract only stated conditions were death and voluntarily resigning. Then, within a company's discretion, a contract addendum may be added to specify the duties and exceptions for the employees.

In most cases, an employment contract is lengthy. Such critical clauses may be left out intentionally or unintentionally. The contract addendum helps to address any contract clauses that may have been left out in the initial contract. In addition, most employment agreements have gaps that may require an addendum to remedy the gaps.

Other standard addendums may include a review of the salary. Employee contract addendums may also include amendments to the positions and roles held by specific employees.

Here's an article on examples of the contract addendum.

What's Included in a Contract Addendum? 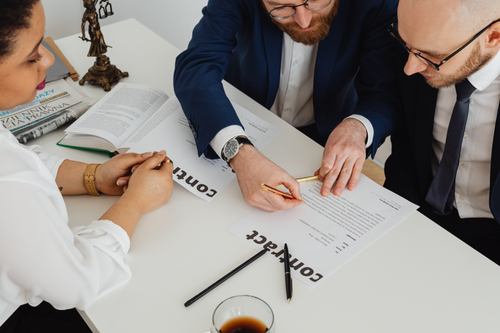 Is an Addendum to a Contract Legally Binding?

An addendum can be amended by the person who did the initial document. Or, another party can amend the agreement with the approval of the original signatories. When these contract amendments are made, they become automatically legally binding. The amendments made become part of the contract until further negotiations.

Legal counsel must even ratify the contract terms to affirm its legality. However, the contract addendum cannot become legally binding unless both parties fully understand the terms of the new agreement and the consequences.

Therefore, the parties should approve of the new changes in writing to ratify its legal status. Therefore, a contract addendum is a binding legal document that effectively changes the scope and application of the original contract.

Most people can't differentiate between a contract amendment and a contract addendum. Addendums add something new to the contract instead of only altering the original document.

The addendum becomes binding when the parties named in the contract agree to all the terms. As such, it's important to understand the dynamics of the contract addendum.

The purpose is the first difference that sets the two apart. An amendment modifies a preexisting clause or element in a contract. For instance, extending a previously agreed-upon deadline is an actual amendment.

When it comes to the authority, amendments only require the signing parties. The signing parties may also be represented by their legal representatives who can make the intended amendments. Any party can make addendums, on the other hand. Such parties include third parties.

How Do You Write an Addendum to an Agreement?

Writing an addendum can be intricate and requires the input of a lawyer. The addendum should be written using the effective date. On the same note, adopting the same format and tone as the original contract.

When done by our contract lawyers, they want to include all the elements of the previous contract in the addendum sort to amend.

Get Your Addendum Done by Professionals

It's important to capture all the dynamics of an addendum. But in most cases, addendums tend to miss critical elements when done outside the legal precincts. If you need a legally binding addendum, post a project in ContractsCounsel’s marketplace to get flat fee bids from lawyers to review.

Meet some of our Contract Addendum Lawyers

Mr. LaRocco's focus is business law, corporate structuring, and contracts. He has a depth of experience working with entrepreneurs and startups, including some small public companies. As a result of his business background, he has not only acted as general counsel to companies, but has also been on the board of directors of several and been a business advisor and strategist. Some clients and projects I have recently done work for include a hospitality consulting company, a web development/marketing agency, a modular home company, an e-commerce consumer goods company, an online ordering app for restaurants, a music file-sharing company, a company that licenses its photos and graphic images, a video editing company, several SaaS companies, a merchant processing/services company, a financial services software company that earned a licensing and marketing contract with Thomson Reuters, and a real estate software company.

Stirk Law is a law firm based in London that advises on dispute resolution, commercial and corporate arrangements, employment and private wealth. We are experts in our areas and experienced in advising on complex and high value matters in the UK and internationally. We have extensive onshore and offshore experience across a variety of areas such as the administration of trusts together with complex fraud and trust disputes. Our expertise includes the conduct of significant and high-value cases valued at up to in excess of £1 billion over a combined 40 years of legal practice in England, Jersey and Guernsey. As well as having a large international network, we work closely with a corporate investigations and risk advisory business based in London and Vienna. Together we can deliver a holistic service for cases involving fraud, dissipation of assets or other illegal activity.

Talin has over a decade of focused experience in business and international law. She is fiercely dedicated to her clients, thorough, detail-oriented, and gets the job done.

Results oriented business attorney focusing on the health care sector. Formerly worked in Biglaw doing large multi-million dollar mergers and acquisitions, financing, and outside corporate counsel. I brought my skillset to the small firm market, provide the highest level of professionalism and sophistication to smaller and startup companies.

Attorney - I graduated in Law from the University of Wroclaw and in Economics from the Scottish University of Aberdeen; My legal interests include, in particular: contracts, intellectual property, and corporate law, as well as transactional / regulatory advisory along with related risk management (M&A); The industries with which I have worked most often are: IT, real estate and construction, professional sport, industrial chemistry and medicine, oil & gas, energy, and financial services; I possess many years of experiences working with international entities for which I have prepared and negotiated contracts, as well as (due diligence) reports, analyses, litigation documents, and presentations; Apart from law firms, I have also worked for investment banks and big 4 - thanks to that I also gained financial, technological, and consulting experiences; I shall be described by: accuracy, openness, honesty, concreteness, a broad approach to the problem, and ... a lack of bad manners, along with a good sense of humour :)

Stan provides legal services to small to medium-sized clients in the New England region, and throughout the U.S. and abroad. His clients are involved in a variety of business sectors, including software development, e-commerce, investment management and advising, health care, manufacturing, biotechnology, telecommunications, retailing, and consulting and other services. Stan focuses on the unique needs of each of his clients, and seeks to establish long term relationships with them by providing timely, highly professional services and practical business judgment. Each client's objectives, business and management styles are carefully considered to help him provide more focused and relevant services. Stan also acts as an outsourced general counsel for some of his clients for the general management of their legal function, including the establishment of budgets, creation of internal compliance procedures, and the oversight of litigation or other outside legal services.