Need help with a Letter Agreement?

What is a Letter Agreement?

A letter agreement is a written legal document that is made between two parties who want a simple way to make their discussions of a transaction official. An agreement letter is binding by the law and can technically be written by just about anybody.

While some verbal agreements may be upheld in a court of law if a dispute comes about, it is safest to have an arrangement in writing so that more than just unvalidated claims are available. A letter agreement will guarantee that the terms of your transaction or promised services are enforceable.

A letter agreement is no less official than a more thorough contract when looking at it from a legal standpoint. It is said that this agreement can be finished by obtaining all signatures by the parties or just by an exchange of two letters detailing the same agreement.

When To Use a Letter Agreement

A letter agreement should be used when a more complex contract is not needed due to the non-complicated facts regarding your transaction. If there is not a contract template available for what you are agreeing to then an agreement letter may come in handy.

This type of agreement is very simple because you really only need to ensure three things are included: an offer; a consideration; and an acceptance. However, if these elements are not included in the letter agreement, then it is not valid from a legal standpoint and if one party is wronged by the other there will be no way to professionally solve the issue.

Letters agreements are sometimes used by people who owe debt to avoid going into bankruptcy over payments they cannot make. This gives the people owing money the chance to settle their debt for less than the total amount owed.

How To Write a Letter Agreement

Writing a letter agreement might not be as difficult as other contract types but there are still elements that you must include in it if you want it to be considered relevant and valid. See below for steps to take when drafting an agreement letter:

Step 1 - Formatting. Format your document the way a formal letter would appear and use the same font throughout. Put the date in the upper left corner. Beneath the empty space put the company or individual’s name who you are writing to followed by their address and who the letter is intended for.

Step 2 - Topic. Write ‘Re:’ and right after that briefly type in the purpose of your letter highlighting the key points.

Step 3 - Greeting. Greet the individuals or company you are writing to before getting straight into the content.

Step 4 - Body. This is the longest and most important part of the letter agreement and will contain the following essential information:

Step 5 - Signatures. Signatures of all parties should be the final part of a letter agreement and the date each party signed needs to also be written. If one of the parties wants to make the letter a bit more formal, then they can take the additional step of having it notarized.

View a sample letter agreement here to get a look into how it should be written.

A letter agreement is somewhat similar to a memorandum of understanding (MOU) and therefore an MOU can be referred to when a letter needs to be drafted. Key terms that should be included in either of these agreements to ensure everything of importance is touched on are as follows:

Other terms that you may want to add to increase the strength of your letter agreement are assignments, choice of law clause , waiver of jury trial, and counterparts. 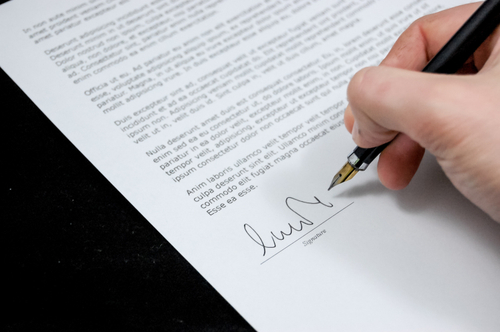 Differences and Similarities Between a Letter Agreement and Other Agreements

Simply put, a letter agreement is a written letter that details the understanding of all parties involved. The letter is made on letterhead and is often written by the party making the offer so that they can explain the terms and conditions in a favorable way to them, which are expected to be agreed to. The effectiveness of a letter agreement can be confirmed just by adding a statement indicating that if the person receiving the offer signs the document, then the deal is done.

On the other hand, a memorandum of understanding (MOU) is structured more professionally as a standard or more detailed contract would be. The largest difference is that the MOU has formal recitals at the beginning and end of the agreement instead of an informal greeting and closing statement like the letter.

Despite their differences, the bodies of a letter agreement and MOU are very similar and should be as clear and detailed as possible so that the goal can be accomplished. They both consist of the names of the parties, details about the sale or service, and signatures. These documents are both usually broad outlines of an agreement opposed to extremely precise contracts.

To read more about the differences between an MOU and letter agreement, visit this article .

Get Help with a Letter Agreement

If you have decided a letter agreement is the right legal document for your situation or if you just want to get more professional information about this type of agreement, feel free to post a project in ContractsCounsel’s marketplace to get free bids from lawyers. All lawyers have been vetted prior to joining.

Meet some of our Letter Agreement Lawyers

Brad is a business attorney with experience helping startup and growing companies in a variety of industries. He has served as general counsel for innovative companies and has developed a broad knowledge base that allows for a complete understanding of business needs.

I am an attorney located in Denver, Colorado with 13 years of experience working with individuals and businesses of all sizes. My primary areas of practice are general corporate/business law, real estate, commercial transactions and agreements, and M&A. I strive to provide exceptional representation at a reasonable price.

George is a lifelong Houston resident. He graduated from St. Thomas High School and then Texas A&M University. He obtained his Doctor of Jurisprudence from South Texas College of Law in 2007. He is experienced in real estate, estate planning & probate, civil/commercial matters, personal, injury, business matters, bankruptcy, general counsel on-demand, and litigation. He is active in the community serving as past-president of the St. Thomas Alumni Board, a current member of the Dads Club Aquatic Center Board of Directors, current member of the Dickinson Little Italy Festival of Galveston County Board of Directors, and former PTO President for Briarmeadow Charter School.

My clients are often small and medium size technology companies, from the "idea" stage to clients who may have raised a round or three of capital and need to clean up a messy cap table. I help with all legal matters related to growth that keep founders up at night - hiring people, allocating equity, dealing with shareholders and investors, client negotiations and early litigation counseling (before you need a litigator). I've seen a lot, and because I run my own business, I understand the concerns that keep you up at night. I’ve been through, both on my own and through other clients, the “teething” pains that will inevitably arise as you scale-up – and I’m here to help you. I have over 20 years international experience devising and implementing robust corporate legal strategies and governance for large multinationals. I now focus on start-ups and early/medium stage technology companies to enable a sound legal foundation for your successful business operations. Many of my clients are international with US based holding companies or presences. My 17 years abroad helps me "translate" between different regimes and even enabling Civil and Common Law lawyers to come together. Regularly, I handle early stage financings including Convertible Notes, Seed and Series A/B financings; commercial and technology contracts; international transactions; tax; mergers and acquisitions.

Chris Sawan is a JD/CPA who practices in the area of business law, contracts and franchising in the State of Ohio.