Need help with an Express Contract?

What is an Express Contract?

An express contract is an agreement that has been wholly spelled out either in writing or orally. This contract includes at least two parties who make legal promises to fulfill set/specified terms toward each other. They agree to be legally bound by these terms according to the law.

This contract requires a mutual intent by all parties involved to be bound by the agreement. It requires the terms to be made so that all parties and those responsible for enforcement of the contract can understand.

The contract must be a definite offer, unconditional acceptance, and some form of consideration. In addition, both parties must offer something to the other in the contract process. The offering may be monetary but is not always.

Here is an article about what express contracts are.

Express contracts work when all parties to the contract make a specific statement, either in writing or orally (or sometimes a combination of the two) that specific terms will bind them. Then, the two or more parties are required to accept the contract and fulfill their obligations or suffer any loss stipulated in the contract.

If the parties to the contract do not fulfill their obligations, they risk losing even more due to violating the agreement. If the contract is legally enforceable, they could also risk legal action.

Here is an article about how express contracts work.

There is only one type of express agreement. However, you may also hear about implied contracts and the different forms available for those.

Expressed contracts have been explicitly stated and defined between the parties. The agreement in this type of contract is very clearly stated so that both parties know what’s being agreed to.

Implied contracts can be ‘in fact’ or ‘in law.’ Contracts occur when, for example, a service is performed. Then, in this example, the implied agreement is that the service will be paid for.

Implied contracts can be ‘in law’ if the actions of one party would be considered an unjust or unfair benefit to the other if no compensation were given. It occurs when there is an implied duty for the party to pay the second party even if no formal contract exists.

Here is an article about types of express contracts.

There are several differences between implied and express contracts that will help you create the specific type of contract you need.

Examples of an Express Contract

There are several different ways to consider an express contract legally binding. So, let’s take a look at several various contracts and examples.

This could be an individual ordering food in a restaurant, assuming they expect to pay for that food. Likewise, having someone clean your home even without an express contract implies that you will pay them after the work is completed.

In these situations, the acting individual can reasonably assume that the work will be completed and will be compensated. This is compared to an express contract where the two parties lay out the terms in advance, either orally or in writing.

Here is an article with examples of express contracts. 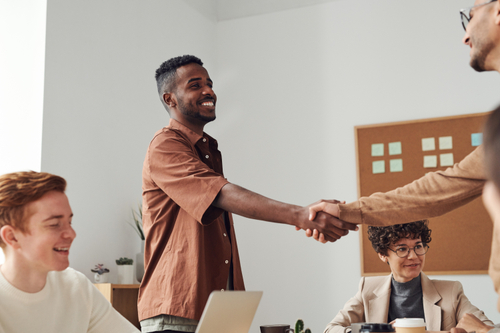 How Do You Make an Express Contract?

To make an express contract, you need at least two parties and something that the two parties can agree to do for one another.

The steps to create an express contract are pretty simple, but the key is that the terms, what each party is offering, are clearly stated. This means that anyone reading the contract or being told what was said will know precisely what the agreement is. They will also see how that agreement can be fulfilled.

Working with a contract lawyer to draft a contract will ensure it is entirely legal. They can also oversee the contract signing or give you more information through a contract clause guide.

Here is an article about how to create an express contract.

How Do You Make an Implied Contract?

Implied contracts are pretty simple to make because they do not require anyone to agree to anything formally. For example, telling the neighborhood kid that you would like them to cut your lawn can be considered an implied contract.

In this situation, the neighborhood kid may come to your house and say they mow lawns and rake leaves for $15. If you say ‘okay, cut my lawn,’ you have entered into an implied contract. It is expected that the kid will cut your lawn and that you will pay them the $15.

Post a project on ContractsCounsel’s marketplace to get flat fee quotes from lawyers to draft and review contracts. All lawyers are vetted by our team and peer-reviewed by our customers for you to explore before hiring.

Meet some of our Express Contract Lawyers

I am an attorney admitted in NY, with over 6 years of experience drafting, reviewing and negotiating a wide array of contracts and agreements. I have experience in Sports and Entertainment, Real Estate, Healthcare, Estate Planning and with Startup Companies. I am confident I can assist you with all of your legal needs.

Rishma D. Eckert, Esq. is a business law attorney who primarily represents domestic and international companies and entrepreneurs. A native of both Belize and Guyana, she remains engaged with the Caribbean community in South Florida: as a Board Member and General Counsel for the Belize American Chamber of Commerce of Florida, and Member of the Guyanese American Chamber of Commerce. She holds a Bachelor of Laws degree (LL.B.) from the University of Guyana in South America, a Master’s degree in International and Comparative Law (LL.M.) from Stetson University College of Law in Gulfport, Florida, and earned a Juris Doctor degree (J.D.) from St. Thomas University School of Law in Miami, Florida. Licensed to practice in the State of Florida and the Federal Court in the Southern District of Florida, Mrs. Eckert focuses her passion and practice on domestic and international corporate structuring and incorporation, corporate governance, contract negotiation and drafting, and trademark and copyright registrations.

Founder and Managing partner of Emerald Law, PLLC, a business law firm specializing in contract drafting and corporate transactions. Kiel worked as in house counsel for a variety of companies before launching his own firm, and most recently served as the Chief Legal Officer for an international private equity firm.

Skilled in the details of complex corporate transactions, I have 15 years experience working with entrepreneurs and businesses to plan and grow for the future. Clients trust me because of the practical guided advice I provide. No deal is too small or complex for me to handle.

Richard is a wizard at taking on bureaucracies and simply getting the job done. His clients value his straight-forward counsel and his ability to leverage a top-notch legal staff for efficient and effective results. Richard is a professional engineer, professor of law, and has been named among the top 2.5% of attorneys in Texas by the Super Lawyers®. When he is not driving results for his clients, Richard can be found with his small herd on his Texas homestead.