Need help with a Release Form?

What is a Release Form?

What is a Release Form Used For?

Release forms are most used in the film, photography, documentary, music, and radio industries to ensure that any content captured by an entity is owned by them and not by the subjects that work with them on the project.

Release forms are important because they help avoid legal roadblocks that can make it possible for subjects to withdraw their consent to use footage, photos, or audio after the product is finished.

Without a release form, for example, an actor in a film could later request that film production staff remove certain parts of a movie that reflects actors in a bad light or no longer serves their purposes. Photographers could be obligated to remove photographs from their portfolios or websites. Radio and music producers might be forced to delete any audio that contains the voice of a party who withdraws their consent to use the product.

Workers in these industries work hard to achieve their finished products. If a subject decides to later rescind their consent for the entities to use publicly, it could be detrimental. Films could be missing entire scenes that are crucial to the storyline, or songs could have to delete entire verses that are crucial to the completeness of the songs.

When a release form is signed, these finished products are protected against the agreement changing in the future. It is one of the many reasons why we can enjoy unedited cuts of movies, and extended cuts of songs, as well.

From a legal standpoint, it's essential for creators to enforce release forms any time they work with a third party to complete the project. This is because if someone requests that their likeness, footage, or voice be removed from a project, and the creator declines, it can spell trouble for them unless a release form was signed.

Release forms tell judges that any content captured was consensual and that subjects understood that when they took on the project, they would be signing their rights away to the finished product. This way, if any legal disputes come up later, creators are protected from needing to alter their work at the request of a disgruntled client.

Release forms are also helpful in ensuring that if a creator wishes to obtain a copyright on a piece, that there are no legal roadblocks in their way to do so. These release forms provide a clear chain of title if the content needs to be used in later advertising, broadcasts, or any other channels.

Check out this article to learn more about what release forms are used for.

Release forms are vital to releasing the rights to a product by a releasor. There are many specific types of release forms that are appropriate for each industry in which they are used.

For example, there might be a contract clause in a photography release contract that entails that if photography is used for commercial purposes, the model must be credited. On the other hand, some release forms might indicate that no credit is needed, regardless of how the photo is intended to be used.

The terms of photography release forms are agreed upon before any photos are used for any non-personal purpose. Both parties must sign the document before any moves can be made to use images this way.

These types of release forms also include details about whether crediting the model is required when licensing the photo to third parties.

Here is an article about the types of release forms. 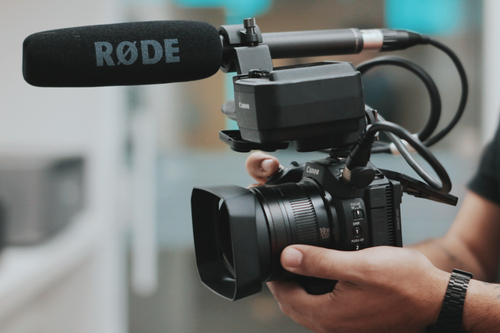 Image via Pexels by Bruno Massao

How Do You Write a Release Form?

The best way to construct a release form is to get the help of a lawyer. Since these forms are important legal documents, it’s never a bad idea to consult a professional to help you through the process.

If you’d prefer to DIY the project, it’s not an impossible feat. You can do a quick internet search online to find pre-loaded release form templates for just about anything you’ll need them for. This is the easiest way to get a release form document without consulting a lawyer.

In the next section, we’ll talk about which terms you should make sure are included in your release form.

To learn more about how to write a release form, check out this article .

If you want a successful release form in your business, you need to make sure it includes vital terms that will make it legally enforceable in court if a legal battle arises. Luckily, the terms of most release forms are very simple and don’t have a laundry list of information that needs to be included.

Here is the complete guide to the most important terms in a release form that you should know:

Learn more about the most important terms in any release form by checking out this article .

Who Needs a Release Form?

Anyone creator that works with people to capture images, video, audio, or likenesses needs a release form for every project they do. These forms are vital to protect against legal repercussions and ensure that everyone is on the same page. Since customer relationships are vital to a business’s image, being transparent goes a long way when it comes to reputation.

If you need help with release forms, lawyers can help. Recruiting the assistance of a trained professional ensures that you don’t miss any major release form components and is a great practice to protecting your business from legal disputes.

Post a project on ContractsCounsel today to connect with lawyers for musicians, filmmakers, photographers, radio producers, and many other industry professionals today.

Meet some of our Release Form Lawyers

Benjamin is an attorney specializing in Business, Intellectual Property, Blockchain, and Real Estate.

Melissa D. Goolsarran Ramnauth, Esq. is an experienced trial-winning trademark and business attorney. She has represented large businesses in commercial litigation cases. She now represents consumers and small businesses regarding federal trademarks, contracts, and more. Her extensive litigation knowledge allows her to prepare strong trademark applications and contracts to minimize the risk of future lawsuits.

I'm a business legal and finance professional with a deep passion for leading businesses through growth. I bring a practical no-nonsense approach to my work.